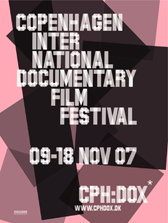 So, after over three years in the making, “Dub Echoes” was finally shown to the public. The world premiere took place in November, in two sold out sessions (one of them followed by a dub party) during Denmark’s CPH:DOX Festival 2007.

We are very proud to have been invited to such a prestigious event. Now we are expecting answers from various festivals around the world, and, off course, are open to invitations.

Meanwhile, we are still looking for a distribution deal for a DVD release, worldwide hopefully.